Based On a Solid Profile, Fitch Ratings Affirms Its BB- Rating for Tecnoglass with a Stable Outlook

Based On a Solid Profile, Fitch Ratings Affirms Its BB- Rating for Tecnoglass with a Stable Outlook.

Fitch Ratings said in a statement that key assumptions within rating case for the company include sales growth continues in 2018 and 2019, supported by existing backlog and growth in U.S. commercial construction. The agency also noted its assumptions for Tecnoglass’ to maintain positive cash flow from operations in 2017 and 2018, gross leverage remaining at or below 3.5x over the intermediate term, and net leverage remaining below 3.0x over the intermediate term.

Earlier this year, in March, the company, whose shares are listed on the NASDAQ and the Colombian Bolsa de Valores, bought Giovanni Monti and Partners Consulting and Glazing Contractors, Inc. (GM&P), a glazing and consulting contractor in Miami, for $35 million USD.

“The option to pay for the remaining $29 million USD of the acquisition amount of Giovanni Monti and Partners Consulting and Glazing Contractors Inc. in shares of Tecnoglass, either in whole or in part, provides Tecnoglass’ with the flexibility to choose some combination of funding so as to maintain its liquidity position,” stated Fitch.

This move was announced just three months after the company acquired Miami-based E.S. Windows, LLC for $13 million USD. The Florida company is the largest importer and reseller of the Barranquilla-based window and building materials maker’s products in the United States.

Despite these new acquisitions, Fitch said that liquidity is considered adequate. “The company held $46 million USD in cash as of the second-quarter 2017 and faced no significant debt maturities until 2022 when $210 million USD of notes mature,” stated Fitch. “Recently completed investments mitigate the need for large capital expenditure in the next two to three years.”

Santiago Giraldo, who was named chief financial officer of Tecnoglass in August, said he was pleased with the affirmation in what has been a challenging year but one that has been weathered well given the ongoing diversification strategy of a company that makes about 80% of its total sales to the United States.

“We expect to grow approximately 6% compared to 2016,” said Giraldo. “Additionally, it is important to see the credit that is given to our business model and cost structure, where we continue to obtain the highest margins in the industry and which gives us the flexibility to continue growing.”

Fitch added that positive rating actions could be driven by a strengthening of Tecnoglass’ business and financial positions. “Stable operating cash flow generation through industry and economic cycles resulting in leverage levels of total debt/EBITDA at or below 2.0x and net debt/EBITDA below 1.5x would be considered positive.” 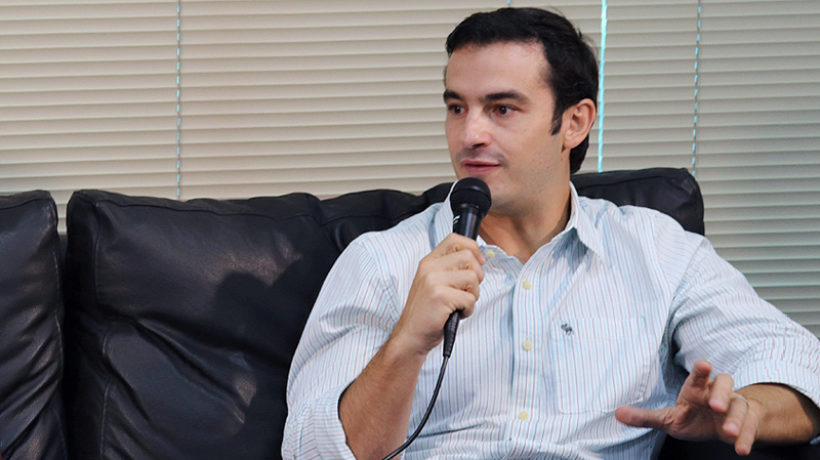 ““It is important to see the credit that is given to our business model and cost structure,” said Santiago Giraldo, CFO of Tecnoglass. (Photo credit: Liliana Padierna)”

Tecnoglass grew rapidly from 2012, as it has gained new business, particularly in the United States. Its growth slowed in 2017 as new construction in Colombia contracted and its U.S. order backlog was deferred during the first half of 2017. The company’s 2017 EBITDA is expected to close at around $60 million USD, which compares unfavorably to $63 million USD as of 2016.

Despite lower 2017 EBITDA, Fitch estimates Tecnoglass EBITDA will expand to about $70 million USD in 2018 as its backlog is fulfilled. Tecnoglass’ order backlog expanded to $487 million USD as of June 30 of this year from $398 million USD a year ago.

Though Tecnoglass in recent years has been selling more products within Colombia, as well as Panama, its main market continues to be the United States. “The U.S. is such a big country and a powerful buyer that we still have a lot of growth to do in the U.S.” Tecnoglass COO Christian Daes told Finance Colombia in September. “The market for windows in the U.S. is over $30 billion USD, and we are hardly making 200 and some million dollars in sales. So that means there is still a long way for us to go.”

The Power of Quality